Discovering Prague From Above 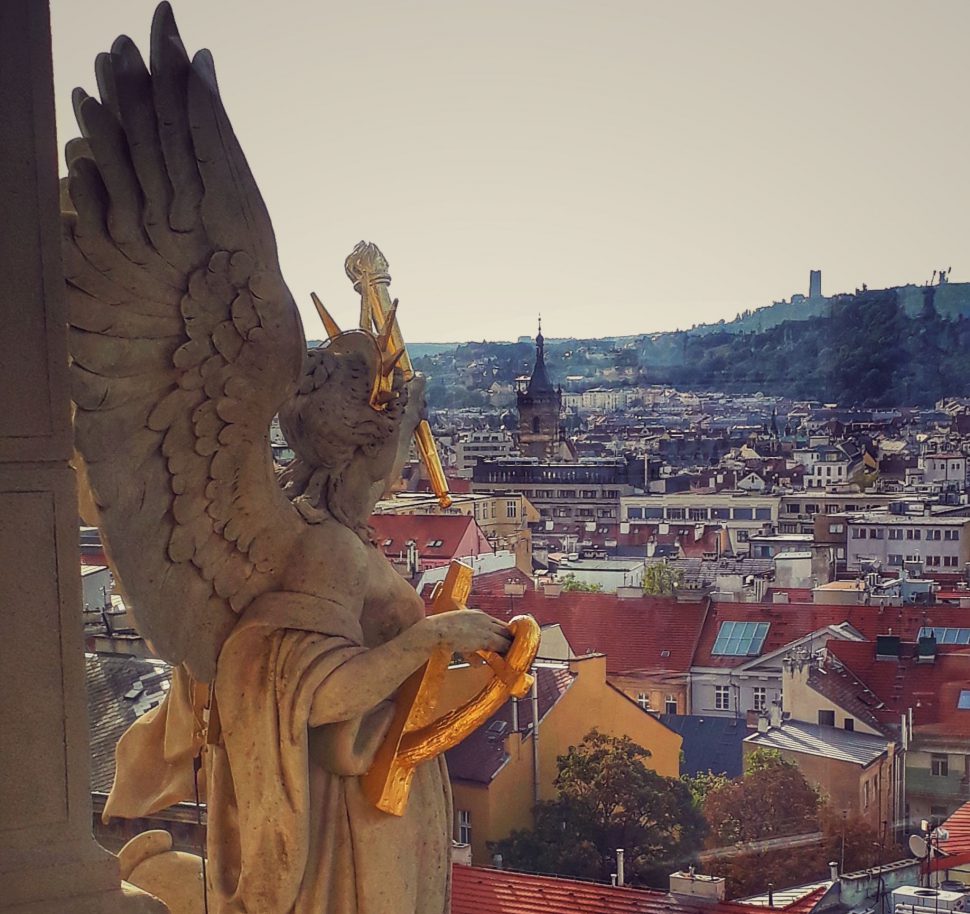 You have already walked your ten thousand steps around Prague today and discovered all the beauty which is hiding behind many corners in the maze of the Old Town streets. Now it´s time to see this beauty from a slightly different perspective… from above … like in our lives – it´s sometimes good to take a deep breath, pause for a minute and symbolically view our current situation “from above”, so we can make the right decisions …

Now we will be climbing some towers and reaching the stars from the rooftops.

The first tower that I would recommend to climb is our version of the Eiffel tower – Petřínská rozhledna.

The tower was built as a part of the Jubilee Exhibition in 1891 together with the Petřín funicular (which you can use to reach the top of the Petřín hill, where the tower is situated). The views are spectacular: you can see the historical center as well as the modern suburbs of Prague, for example the biggest stadium in the world “Strahovský stadion”. It used to have a capacity of 250 thousand spectators and after the Communist coup in 1948 “The Spartakiads” were held here. The Spartakiads were mass gymnastic events held every five years to celebrate the liberation by the Red Army in 1945 and used as a propaganda events for the regime. But my personal memory of this huge stadium is connected with year 1990 – directly after the Velvet Revolution at this stadium The Rolling Stones had their concert for the first time. And I was there! What an emotional moment, after the end of Communism, such a famous band came to perform in Czechoslovakia as well.  The Stones even became very good friends with our president Václav Havel and since then returned to Prague many times.

Another tower to climb, which has earned a reputation for being an example of the ugliest architecture (still interested to see it?)… is Žižkov Television Tower, also built during the Communist period.

The locals sometimes call it “the space rocket ready to launch”: just look at the photo. It was completely renovated few years ago and actually the design of the interiors is very interesting. Up there you can find a bar, a restaurant, an observation deck and if you are not afraid of the heights, you can spend a night in the “One Room Hotel”. Once you get closer to this television tower, you can see another interesting feature – crawling babies are climbing to the top – an art work of young Czech artist David Černý. I hope all this made you interested to see this “ugly” tower. It´s worth it and you can also explore a very vibrant neighborhood with many nice cafés and restaurants.

For the third time, recommending a tower – the Old Town Bridge Tower.

This gate, guarding the entrance to the Charles Bridge, was built in the 14th century by Petr Parléř, the royal architect of our most important king Charles IV. The tower is one of the most impressive examples of the Gothic style in our city. After climbing 138 steps to the top, you will have a breathtaking view of the Charles Bridge and the historical city around you. When the architect designed the tower, it was divided into 4 levels to correspond with the four elements – earth, air, fire and water. The top level, where the viewing gallery is situated, represents the water element = the stellar sphere. Well, as I promised at the beginning, we will be reaching the stars!

Right now, after climbing the towers, we can visit some interesting rooftops which are open for public and combine wonderful views with an interesting culture experience.

Directly in the center of the city, close to the Wenceslas Square, we have a unique complex of buildings, called Lucerna (The Lantern). It was built in 1920s by Vácslav Havel, the grandfather of our former president Václav Havel. Up to today it serves its unique function as a culture center with a big concert hall (where even Louis Armstrong had his concert in 1965), cinema, restaurant, café and many shops and offices. When the complex was originally built, they planned to use the rooftop terraces frequently, but it never really happened (also due to 40 years of Communism, when the whole complex was nationalized and the state didn´t maintain the complex). Today, it´s back in the hands of Havel´s family and undergoing step by step renovation. And the best news is that after so many years, even the rooftop terraces were opened to the public.

First, you have to use the still functioning “Paternoster” elevator, which is already a great adventure (a “paternoster” is an elevator that consists of a chain of open compartments that move slowly up and down in an infinite loop, which reminds you of a rosary, hence the title “pater noster”, “Our Father”)… and then you will see the city around you with the beautiful view of the Prague Castle area. You can have a glass of wine, a mug of a good Czech beer, or eat some local food prepared directly on the grill here. They also organize many culture events – live concerts, different interesting exhibitions, movie projections, or sometimes you can come for a morning yoga session with live cello music. Many unforgettable moments…

For another interesting rooftop view, I have to send you a bit of the city center, to the district of Letná. If you´ve had enough of history and architecture and you want to experience slightly different exhibits, here we have two interesting museums – the Technical Museum (with many unique examples of old local cars, airplanes, trains) and the Agricultural Museum.

And the rooftop of this second museum is our goal in this area. You can find up here a herb garden, fruit trees, bushes and also beehives. New pleasant lawns give you a great opportunity to sit down, rent a picnic set and enjoy the view with a glass of wine in your hands…

Finally, we will visit our “Golden Chapel”, as the locals call our National Theater, built at the end of the 19th century also as a symbol of our desire for independence from the Habsburgs. At that time, the whole Czech nation contributed to build our Czech National Theater, where you can hear operas written by Czech musical heroes of the National Revival period like Antonín Dvořák or Bedřich Smetana. Now, during the different performances, you can visit the rooftop and have a glass of champagne with a wonderful view over the Vltava river towards Prague Castle on the other side.

I hope that after seeing Prague from above, you will feel the vibe of our beautiful city even stronger, and your passion for Prague will be even deeper in your hearts…

As a movie tip for our “views from above” topic, I would like to recommend a movie from 1968 called “Nebeští jezdci/ Riders In The Sky”. It´s a great movie about the Czech pilots and bombers who served in the British Royal Air Force during WWII. The name of the movie was inspired by the classic country song by Stan Jones, “Ghost Riders In The Sky”, and you can recognize the song in the movie several times.