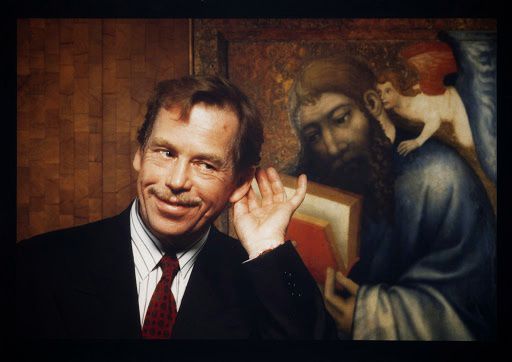 In different stages of our lives we are influenced by many people, who shape us and create our moral values, our attitude to life and our strength in general as a human. Starting with our beloved parents, siblings, school mates, teachers, politicians and many others…

I also have heroes from our Czech history, that are very important to me and I would like to share those with you…

OK, let´s start in my childhood… Remember all those children’s cartoons? Mickey Mouse, Popeye The Sailor Man, Tom and Jerry? Well, I grew up in a Communist Czechoslovakia in 80s and those cartoons where hidden behind the Iron Curtain for me… so my hero as a little child was Krteček / Little Mole … for many devoted gardeners the mole is the big enemy, destroying their beautiful flowers and veggies. But over here, in Czechoslovakia of my childhood, Little Mole was the good guy. Created by Czech cartoonist Zdeněk Miler in 1957. In the lovely stories, he and his friends are kindly teaching children how to help each other, be kind to everyone, even if you belong to a different animal herd (like for humans to a different ethnicity, different religion, different sex etc.) and kids can learn the core values.

Did you know that Little Mole even experienced the microgravity in the space? American astronaut Andrew Feustel took him on his mission in 2011. Here is the proof…

This was my childhood, happy, colorful, surrounded by loving parents and older brother… but I was growing up and the world around me was changing. So were the heroes that influenced me.

When I was 12 years old in 1989, there was a Velvet Revolution in Czechoslovakia and the Iron Curtain was finally gone.  The main name that you could hear all around you, was Václav Havel. The leader of our Revolution and soon to be the president of modern and again democratic Czechoslovakia. Till today, I am really grateful I could experience such an important change.

Among all the different theatre plays and books that he wrote, I have one favorite – it is called “Summer Meditations”. It´s a series of thoughts about his view of democratic politics, his hopes for his country and his role as president.

Let me quote from this particular book: “As ridiculous or quixotic as it may sound these days, one thing seems certain to me: that it is my responsibility to emphasize, again and again, the moral origin of all genuine politics, to stress the significance of moral values and standards in all spheres of social life, including economics, and to explain that if we don´t try, within ourselves, to discover or rediscover or cultivate what I call “higher responsibility”, things will turn out very badly indeed for our country.“ This was written in 1991, but even today, it´s so true and important. I would even say – watching the current events in my country and also all around the world – it is even more important to be reminded about it right now.

Finally, one last, but not least important figure I admire is Milada Horáková. She was already very active during the period of our young democracy after Czechoslovakia was founded in 1918. For her anti-Nazi activities, she spent 5 years in Nazi prisons. After the war her political activities again focused on enhancing the role of women in society and preserving Czechoslovakia’s democratic institutions. When the communists took over the country in 1948, she strongly disagreed with the coup, and resigned as a MP. In 1949 she was arrested and accused of being the leader of an alleged plot to overthrow the Communist regime. In the show trial she was sentenced to death. Many prominent figures in the West – such as scientist Albert Einstein, former British Prime Minister Winston Churchill or former US First Lady Eleanor Roosevelt – petitioned for her life, but the sentences were confirmed and on 27 June 1950, at the age of 48, she was hanged. Her last words were: “I’m falling, falling, I’ve lost this fight, I’m going with honour. I love this country, I love these people, build their prosperity. I leave without hatred towards you…”

She also wrote several letters to her family, but the communists never followed her last will and her only daughter, Jana Horáková-Kánská, received the letters from her mother only after the Velvet revolution in 1990. The words written in the last letter to her daughter Jana resonate in my head very often: “Don’t be ashamed to admit the truth you have come to realize, even if you proclaimed the opposite a little while ago; don’t become obstinate about your opinions, but when you come to consider something right, then be so definite that you can fight and die for it.”

This year we commemorated 70 years after her death and these banners were placed on many public buildings with the inscription “Murdered by communists “.

If you would be interested to learn more about Milada Horáková, you can also watch a Czech-American docu-film Milada by director David Mrnka from 2017, which received numerous awards.

These are some heroes of my life and I would be very interested to hear about yours too…. Please do so in a comment …

Now let me close this article with the words of Václav Havel: “Truth and love must prevail over lies and hatred“!